Starting its successful European concerts in 2010 with Salzburg, the Borusan Istanbul Philharmonic Orchestra has, after BBC Proms in 2014 and last year’s European tour, given two concerts in Hong Kong as part of the 45th Hong Kong Arts Festival on February 15th and 16th at the Hong Kong Cultural Centre and the Hong Kong City Hall to standing ovation. With its artistic director and principal conductor Sascha Goetzel at the helm, BIPO shared the stage with violinist Vadim Repin and pianist Gülsin Onay on two nights.

Turkey’s leading symphonic ensemble, the Borusan Istanbul Philharmonic Orchestra (BIPO), has recently added another successful deed to its international achievements. With its organizing body Borusan Sanat’s commitment and dedication to making BIPO one of the leading orchestra’s of Europe, the orchestra made its appearance at the Opening Events of the Salzburg Festival in 2010 followed by a concert at the Royal Albert Hall as part of BBC Proms 2014 which received very positive reviews. Their European tour in 2016, covering Vienna, Friedrichshafen, Frankfurt and Nürnberg, was proof that BIPO was a promising orchestra. During the last six years, BIPO has also released three critically acclaimed albums under the Onyx label in 2010, 2012 and 2014.

This international renown finally paved the way for BIPO to be invited to the 45th edition of the Hong Kong Arts Festival which showcases local and international productions and concerts from different disciplines. BIPO gave two concerts on the 15th and 16th of February under its artistic director and principal conductor Sascha Goetzel accompanying two renowned soloists of the classical music world: Vadim Repin and Gülsin Onay.

The second concert at the Hong Kong City Hall’s concert hall featured renowned Turkish pianist Gülsin Onay, who has been performing extensively around the world for decades, in a program comprising Erwin Schulhoff’s Ogelala Suite, Ahmed Adnan Saygun’s Piano Concerto No.1 which Onay has been championing around the world in her illustirous career, Mili Balakirev’s “Islamey” and Ottorino Respighi’s Belkis, Queen of Sheba. With Erkin’s “Köçekçe” as the encore, BIPO received another standing ovation and completed another feat in its international ventures.

Pausing its season concerts in Istanbul for the Far East tour, BIPO meets its audience with three concerts in March accompanying starts of the classical world. 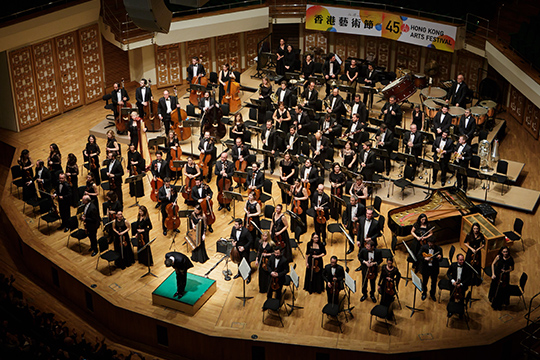 You can find more details on BIPO’s Hong Kong concerts on its tour blog: http://bifoturnede.com