THE RECORDING OF OUR CONCERT IS ONLINE
• NEWS

We are making the recording of the second half of the Sascha Goetzel 10th Anniversary Concert, which was the last concert of the past season, online for our viewers.

In this concert, BIPO under the direction of Sascha Goetzel was accompanied by artist Carlito Dalceggio, known for his paintings, sculptures, films and installations, with a performance that resulted in magnificent artworks that were offered for sale to benefit the Borusan Kocabıyık Foundation.

The Swan from Saint-Saëns’ The Carnival of the Animals, In a Village from the Caucasian Sketches of Ippolitov-Ivanov, Dance of the Knights from Prokofiev's Romeo and Juliet, Dukas’ The Sorcerer's Apprentice, movements from Mussorgsky's Pictures at an Exhibition, and Ravel's Bolero…

You can watch the recording of the past seasons’ last concert at 20.00 here. 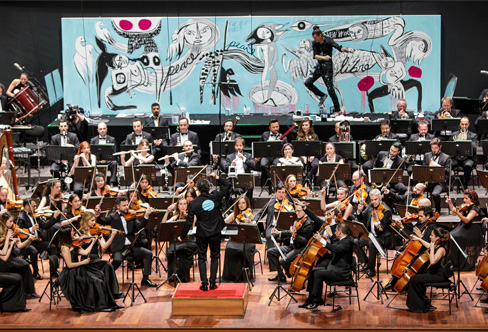